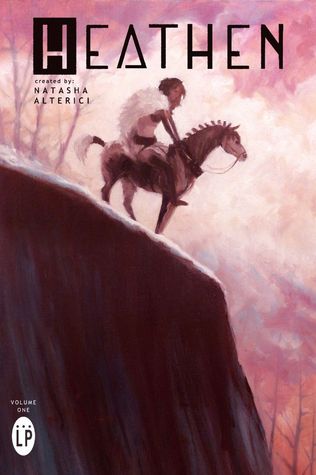 “Heathen Volume One collects the first four issues of the acclaimed fantasy series from creator Natasha Alterici. Aydis is a young Viking woman, who after being banished from her home, sets out on a mission to right the wrongs of a corrupt god. Her first move is to find and free the cursed Valkyrie Brynhild. Gods, demons, and creatures of lore, Heathen is packed with fun intriguing characters and lavish artwork. The trade features an oil painting cover, cover gallery, and a forward by award winning lesbian fiction author Geonn Cannon.”

I am only going to talk about our main character Aydis, who we get the most of in this volume. She is amazing, she is honest, brave, kind and selfless. But she still has self-respect. She is a very strong and talented Viking and she is told that the things she wants to do is for men, but she wants to prove that women can do that as well and maybe even better. She also knows that her feelings aren’t wrong and there is nothing wrong with her falling in love with women.

This first volume felt to me as an introduction and the build up to the rest of this series. I really like the way the world is build up, the way gods and Vikings are incorporated in this Graphic Novel series. At the beginning I needed to get into the art style which is used, but now that I am into it I love it so much and I actually want more. Also a quick warn for a bit of female nudity.

I enjoyed this Graphic Novel, it took me a few pages to get into the art style, but when I got used to it, I really loved it. To me this first volume feels like a set-up for the rest of this series, for which I am very excited. And I love our main character who is a Viking and a lesbian and she has a feminist goal.