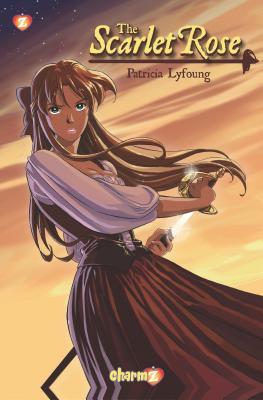 “A new Charmz series – Fun historical adventure with a female lead. The Scarlet Pimpernel has nothing on THE SCARLET ROSE! Maud is quite happy living her simple life with her father and learning the exciting art of sword fighting. But when her father is murdered, Maud is whisked away from the life she knows by her rich and lordly grandfather. He wants to give her a home – on his terms – and help Maud become a real lady. All Maud wants to do is keep on fighting, so that she can have her revenge on her father’s killer. High adventure and historical fiction come together in a swashbuckling thriller! Swords, vengeance, and a dashing highwayman known as the Fox comprise the key components to The Scarlet Rose, as Maud learns everything she thought she knew about her life wasn’t true, and how to grow and grieve after losing her father. The Scarlet Rose blends exciting, thrilling action with grounded, emotional characterization.”

This series is being translated from France and I believe that it is already completed in France, but I don’t know for sure. I enjoyed the first installment in this series. This felt like it was targeted to a younger audience, the love the main character feels is a bit childish and even her actions are. But I do enjoy the main character Maud.

I like the art style, it is very vivid with colors and the drawing feel very cartoonish, which I don’t mind. I feel like the story is going to take off from the point we left off. In the first 2 chapters (which is what this installment contains), you get introductions to the main characters and the reason why Maud does what she is doing.

I am excited to see what will happen in the rest of the series, but I don’t think I will be continuing on with it as soon as the next installment comes out. But I will keep it on my radar.